One of the questions asked the most is what are the best pull ups for older bedwetters? First, we have to figure out what “older” actually means. For most parents, this means kids older than 6 or 7 who should otherwise be dry at night. But, an older child experiencing bedwetting might be older than that such as 9-years-old, 10 or even a teenager. Finding the best pull ups for older kids can be a challenge, but we have included the most popular ones below in our complete guide.

Our guide is written for children ages 8 and older who wet the bed. Whether it is once a week or twice a night, wetting the bed at any age can be embarrassing. In addition to pants you can find easily in the store, more options can be found online. We have included links to products whenever possible.

What is a pull up?

A pull can be used for regular diapering, toilet training, or bedwetting. It is sometimes referred to an all-in-one diaper. Most of the time it is a disposable pant. However, pull ups can be reusable or washable as well. Pull ups were first made for toilet training and helping toddlers transition out of diapers. However, companies such as Huggies also have “little mover” pull-on diapers intended to be actual diapers.

There are two major brands who make pull ups for kids who wet the bed.  Kimberly Clark Corporation makes the Huggies brand of diapers and GoodNites bedwetting pants. Proctor & Gamble (P&G) makes Pampers diapers. P&G has recently switched from making Underjams to Ninjamas. Luvs diapers is another brand made by P&G . They used to have a bedwetting pant called SleepDrys, however they are no longer made.

1. Nighttime Underwear by Up & Up

As soon as GoodNites and SleepDrys became more popular, store brands of disposable bedwetting underpants began to appear. Usually with bad results. Some of the “generic” diaper makers simply made their toddler pull ups larger. This did not account for the increased capacity needed for older bedwetters. Even today, generic or value brands of bedwetting underwear are often very cheaply made. This makes them leak easilly.

This is not the case with the Up & Up brand of disposable underpants found in Target stores. Up & Up nighttime underwear is a very good disposable pull up for bedwetting. The fit of the pants is similar to UnderJams and the absorbency is close or equal to GoodNites. In fact, they really are a combination of both GoodNites and Underjams but for a lesser price.

Unlike GoodNites, Nighttime Underwear by Up & Up come in only two sizes and styles. A S/M pant for 38-65 pound children and a L/XL for older bedwetting children weighing 60-125 lbs.

Even though a “store brand,” these pull ups offer great protection at a great price. Plus, Target stores are almost everywhere in the U.S., so finding these affordable GoodNites alternatives is easy. 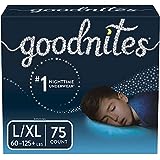 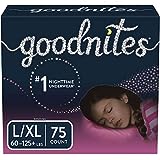 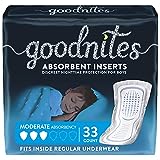 GoodNites remain the best absorbing pull up for bedwetters since introduced in the 1990s. They originally came in a plain white design and only two sizes: medium and large. A few years later, however, they came out with an extra-large size of GoodNites.

GoodNites have changed throughout the years. Sizes have changed and they also now make different underpants for girls and boys. They tried other projects such as disposable boxers (sleep shorts for girls) and reusable underwear. Tru-fit underwear used disposable pads as an insert. Both the boxer shorts and Tru-fit underwear are not made anymore. GoodNites branded themselves several different names: NightTime Underwear (current), bedtime Underwear, bedtime pants, underpants for nighttime and simply underpants. They stopped using the brand “PullUps” on packaging many years ago.

GoodNites currently have several different kinds of underpants and products to help with bedwetting. They continue to be one of the most absorbent and easiest to find in stores. They come in both girls and boys versions in sizes ranging from XS, S/M and L/XL to provide protection to kids wetting the bed all the way from initial toilet training to teens. In addition, they make GoodNites Bed Mats, a disposable sheet used on the bed. In 2020 they introduced GoodNites Absorbent Inserts. These are basically the same as adult male guards that are placed in regular underwear for light to moderate bedwetting.

Because of their easy availability and quality, GoodNites are a great choice for older kids who need protection at night.

Next on our list is Parent’s Choice bed-time underpants. These are another store brand. This time they are made for and distributed by Walmart. Like the Target underpants (Up & Up) Parent’s Choice is a good quality bedwetting pant that both works well and is easily available. Recently, however, it seems many stores run low on stocking them in the aisle. Probably because they are so popular.

The pants use the same sizes as GoodNites and Up & Up and feature a mainly white pant with underwear-like prints on the front that look like underwear elastic. The same pants are for both girls and boys which means they don’t have any gender-specific absorption or features. Despite this, the pants are very good at protecting bedwetters at night and absorbing liquid.

One of the main complaints about the pants in the past has been the designs have been very bold/colorful even on the larger sizes. In the last year or so, they have gone to a slightly more discreet cloth like covering that has faint stars and half-circles on them rather than the front panel being fully colored.

Since a lot of Walmart stores across the U.S. are open 24 hours, the pants are also readily available if you run out or use the last one. 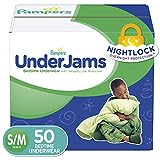 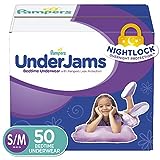 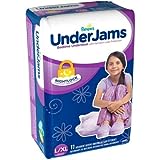 We are going to list Pampers UnderJams in this guide to the best pull ups for older bedwetters because they can still be found in stores. However, like we mentioned, they are being phased out in favor of Ninjamas. UnderJams were a major brand that took on GoodNites and were marketed as being even more discreet while offering the same protection as GoodNites.

UnderJams fit differently than most disposable underpants and more closely resemble the old “TrimFit” GoodNites that Kimberly Clark discontinued. The waist sits lower and early commercials showed children roughhousing at sleepovers without it being seen. The pants also fit smaller, with some parents switching from the same size of GoodNites and not being able to use UnderJams because of the size differences.

While UnderJams would normally have ranked higher in our guide, but we added them in here because they are being discontinued. 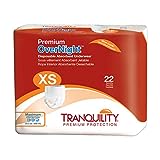 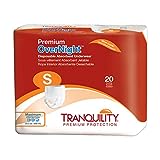 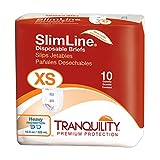 This product in our guide is not something found in most stores so it needs to be ordered online. The Tranqulity OverNite pull ups are actually an adult pant that comes in a XS size that fits waist sizes 17-28”.

The Tranquility pull ups, like their name, are a premium brand. They are well-known within the adult incontinence area for being well made and reliable. Like the other pants in this guide, they can be used for bedwetting. However, they can also be used during the day as well as needed. Since they are made for the needs of all ages, they do not have designs on the outside of the pant.

Tranquility also makes other pull ups in a variety of capacities for those who need less protection, as well as full briefs or diapers for those needing complete protection. You can order them online or use their website store locator to find a store near you.

In terms of reliability, absorbency and value, the best pull ups for bedwetters that won’t break the bank are definitely Target Up & Up Nighttime Underwear. They are cheaper than GoodNites but at a lesser price. GoodNites are definitely first terms of absorbency, fit and innovation. However, their higher price, probably due to licensing agreements with Disney, Marvel, etc. tends to make Up & Up the clear choice for the best pull up underwear for bedwetting, especially for older kids.

You may also notice that the replacement for Underjams, Ninjamas, does not appear on this list. This is intentional. Ninjamas have several drawbacks including fitting smaller, an odd elastic waistband and swell up a lot when wet. In addition, the bright colors throughout the entire underpant are not very discreet. Hopefully this will help you find the best nighttime protection for bedwetting in your home. Please leave a comment if you would like to add to the discussion 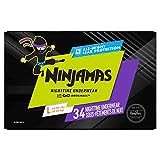 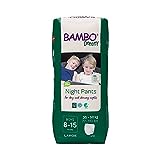 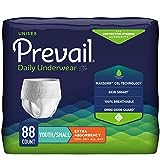